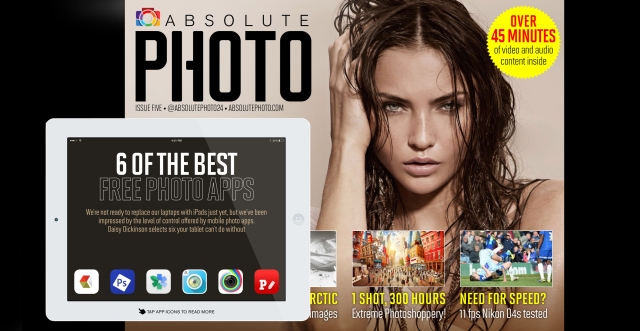 With built-in WiFi fast becoming a standard among the latest camera releases, more and more photographers are becoming completely mobile in the way they work. While i’m not sure i’m quite ready to throw out my laptop and Light Room in place of apps on my iPads –  I have been pretty impressed by the photo-polishing that can easily be achieved with only a few taps on an app, to read my full review in all its interactive glory be sure to check out the latest issue of Absolute Photo Magazine, an iPad only digital magazine crammed with photo tips, interview and more – plus my feature is currently available as a free preview to download here.

My tools:
All of my images were shot using an Olympus PEN E-P5 with built-in WiFi, uploaded to my iPad Air using the free Olympus Image Share app. 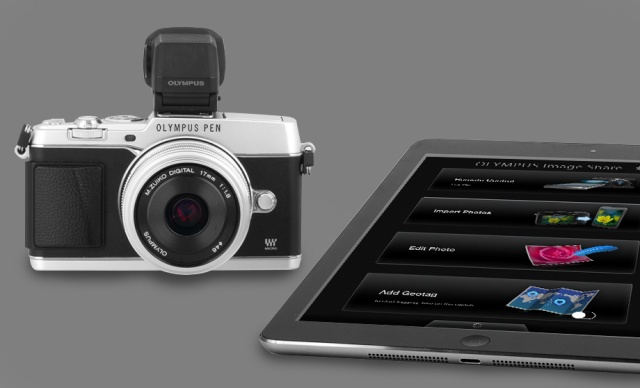 Photographers with a background in film, or those who enjoy nostalgic retro tones will love the VSCO Cam app. Released around a year ago, rated 4/5 stars on iOS and 4.3/5 on Android it’s proving pretty popular. I’m a huge fan of photo apps, and will flit from one to the other looking for the perfect package, I also love convenience and anything that will save me time. I hadn’t tried this app before, but as I grew up developing my films and skills in a darkroom, I was particularly drawn to the promise of beautiful elegant imagery. When you open up the app you’re greeted by a Tumblr meets Instagram mash-up, where I quickly discovered that it’s not all about filters. VSCO offers an integrated platform that encourages social sharing with the VSCO Grid so you can find and follow friends and photographers around the world.

As a massive Instagram fan already, adding yet another sharing app wasn’t something that strictly appealed to me, however there is also the Journal which is a pretty cool zine-style tab with artist profiles and interviews. As for the tools, you’ve got your basics including temperature adjust, rotate and crop, contrast as well as vignette, shadows, highlights and a grain tool. The selection of pre-set filters offer beautifully saturated and smooth film-like effect, with an easy-to-use strength scroll. Adam Thirtle, Olympus ambassador and skate photographer whose photography carries a film-like gritty quality oozing of beautiful celluloid tones tells us that: “VSCO and Snapseed are my weapons of choice. I like the convenience of VSCO Cam if I just want to put something on Instagram – it’s as easy as sending the image to my phone, adding the C1 filter, turning the effect down a little and it’s good to go.” I find myself agreeing with Adam, after spending some time playing with the app I find that I’m very quickly happy with the results, just with one or two filters and don’t feel the need to spend ages using lots of tools. Professional wedding photographer Robert Pugh tells me that:“This is my all-time favourite app as it emulates film. You get a good selection of filters for free, but can also add to them with rolls of in-app purchasing through the shop. I have to say this is my 5-star choice for free aps.”

Photoshop Express is Adobe’s free app version. As you’d expect from Adobe, this app offers an almost flawless user-interface and functionality. It’s my own personal long-time favourite as the quick and convenient ‘go-to’ app and the one I’d choose for editing a batch for an album. Straight away it’s easy to see how intuitive the app is to use, making full use of the screen with your options below in a handy scroll bar. There are plenty of free filters to choose from, my favourite being ‘Autumn’ which adds a soft vignette and a heightened contrast I would normally achieve with curves adjustment. The ‘Silvered’ filter is also another I find myself using when I want to convert to black and white, as it gives a strong, defined appearance which is great on skin tones and reflections. Along the top of the screen there’s a dandy little ‘undo’ button which takes you back through any steps you have chosen. You’ll also find a ‘compare’ button which if you tap and hold shows your original image so you can see the changes you’ve made. For the tools, you’ve got the basics, and no unnecessary extras, however the tool to ‘Reduce noise’ is actually an add-on cost at £2.99 which seems pretty pricey for a fairly basic function, you can preview it though allowing you to essentially ‘try before you buy’. As well as red-eye reduction, some jazzy frames and edges options, the crop tool is actually more advanced than a lot of other apps on the market – offering a flip and straighten function that’s really handy and not so readily available on other apps. An addition I’d like to see on this great all-rounder would be a clone tool, however Robert Pugh was quick to let me know that the more advanced (£6.99 paid-for) version for the iPad, Photoshop Touch, is just as powerful as the desktop version and that you can enjoy most of the tools you’re used to on your desktop including layers and cloning! 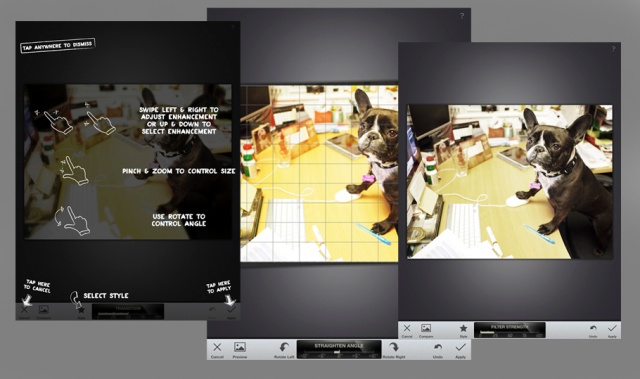 Snapseed is the first decent app I used when I was new to iOS, and introduced me to the idea that you really could create amazing effects and corrections from your phone. When using this app on a tablet, you can enjoy the full-screen benefits it has to offer. Working on a swipe left and right mechanism, once you’ve got the hang of the interface – which is a little complicated at first – you can soon navigate through the many functions on offer. Swiping up and down selects the effect, and right to left adjusts its strength. You’ve got the compare function like on PS Express which I like, and have also got a bunch of hard-working  filters which are little more advanced than they first appear. The effects include Vintage Films, Drama, Grunge, and center focus.

The HDR Scape function is actually pretty convincing, and the Tilt-Shift offers a diorama look where you can choose an elliptical or linear focus area. What’s cool about a lot of these functions is the added control offered, where on many you can select just areas of the photo you want to change rather than whole image. Adam Thirtle, who named this app as one of his favourites went on to tell me: “Snapseed is great for more control over your editing. It takes a little longer than VSCO Cam, and sometimes I’m left thinking I might as well have edited on my laptop, but the results are great. Something I’d like to see is custom pre-sets, since it’s usually the same process I would use for most of my images.”

I came across this app late last year when I started to take my blog a bit more seriously and wanted to be able to add effects and create collages on-the-go. At first I was just going to this app for the light leaks and image grouping functions, but was pleasantly surprised when I discovered that it actually has a few advanced functions even over more serious apps like PS Express – such as the heal tool, which allows basic edits of blemishes and shine, the performance of these are OK for a quick blog, but anything more than the odd subtle spot and I still find myself reaching for my laptop for more control. The collage option is great for adding multiple shots into one, with endless framing choices – a nice touch being able to round the edges and change frame colour.

You can size these at most ratios but a popular option is the 1:1 Instagram-ready size. Rated a whopping 5/5 stars on iOS this app is super user-friendly, with tons of fun effects such as vintage and subtle filters, some of my favourites include the rather strangely named Doris, Rusty and Jyler. Within the Overlay tab you’ll find lots of choices to download for free including light leaks, bokeh effects, vingette’s, chemical burns and some pretty useful colour corrections and grads. You also have access to all your basics in Adjustments, with the smooth tool pretty close in comparison to PS Express’ paid-for noise reduction tool. While not the most advanced app for photo corrections, this one will definitely appeal to the blogging community.

A fairly light-weight app, I came across Aviary when wanting more options when editing portraits and adding text. Something cool I found while using this app, is the added control you have over your image during the editing process than I found in a lot of others. When swiping and adding filters you can pinch to zoom in and out of your edit, allowing you a closer view of what you’re up to; particularly useful if you’ve chosen to edit on a small phone screen. The ‘blemish’ tool is probably the best one I’ve found so far within apps, and worth it for that alone. There’s also a little brush icon which is for whitening teeth, and is surprisingly effective.

The text tool is basic, but a nice addition, particularly for bloggers or those uploading images for websites who need to quickly add text to images. Voted within the top 50 iPad apps by Time Magazine in 2013 it also scores 5/5 stars on iOS where users comment on enjoying fun functions such as the stickers tool, which you don’t see on every photo app. These let you overlay funky little logos like eyeglasses, speech bubbles, arrows, and other additions onto your photo. A decent selection of these are included free, with more available to purchase within the app. There’s also a dedicated tab for making your own memes – which Instagram users should like.

Phonto
iOS: Requires iOS 7.0 or later. Compatible with iPhone, iPad, and iPod touch. This app is optimized for iPhone 5.
Android: Requires Android 2.3 and up
Size: 39.1MB iOS, 21MB Android
Great for: Typographers
Pros: Hundreds of fonts to choose from
Cons: No control over subtlety of filters 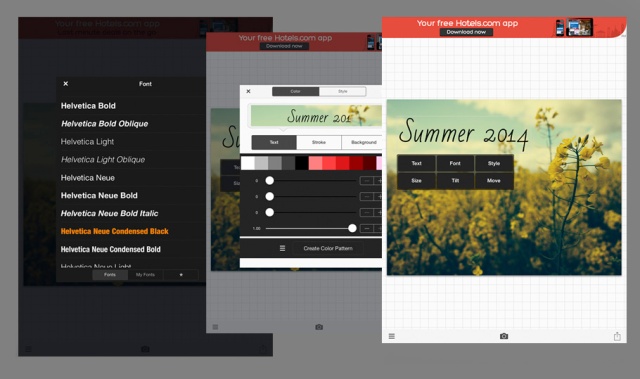 With more than 200 fonts available, this is a simple app which allows you to add text to your images, but also includes some basic filters. Unfortunately correction tools aren’t included and the strength of the filters cannot be adjusted, but providing you open an image you’ve already edited elsewhere then this shouldn’t really be a problem. I feel that the advanced functionality with the type outweighs the abundance of photo tools; there are just so many different styles to choose from it’s quite staggering! I chose to add some basic text to an image and tried out the ‘instant’ lomo-style filter. With 4.5/5 stars on iOS this app seems to be a favourite with graphic designers, a nice element being that it saves images at their original resolution, supports iPhone 4 resolution and doesn’t strip Exif data, which is a nice touch particularly for fans of using Flickr.